Please indicate your country/region and your date of birth.

Sorry, you are under the legal age, we can not welcome you on our site.

ALCOHOL ABUSE IS DANGEROUS FOR HEALTH. TO CONSUME WITH MODERATION.

A Savoir-Faire More than Organic

Ao Yun draws on generations of local savoir-faire based on a profound understanding of the land, of its extreme environment and all the challenges that come with it. An environment in which plant and animal nourish each other in a closed, carbon-zero and sustainable ecosystem – the locals call it a virtuous circle. 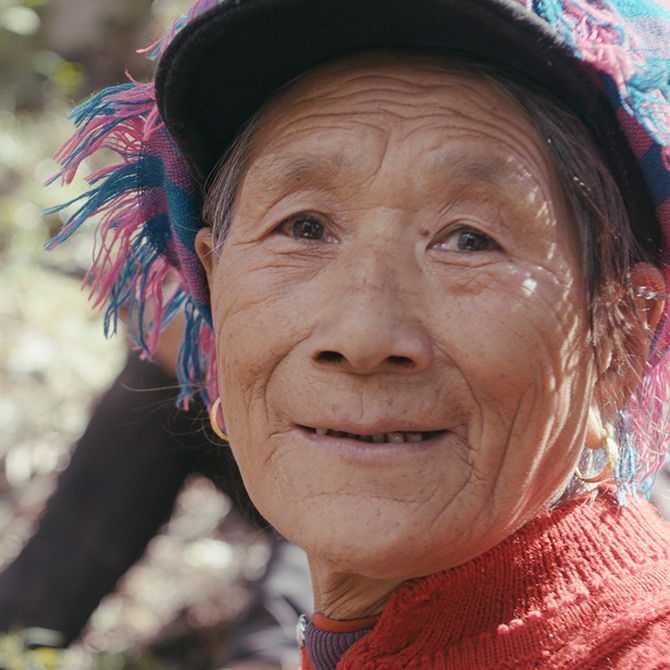 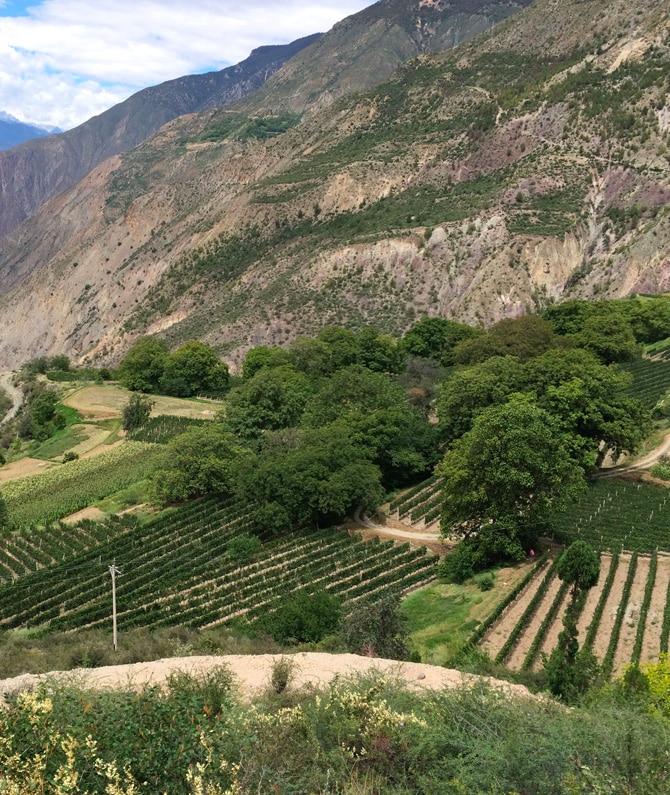 Each of Ao Yun's 314 parcels spread across the 4 villages has its own variations, its own subtleties. Together, they constitute approximately 20 separate terroir types, with each parcel harvested in 2 to 3 runs, ensuring the grapes are picked at their optimal ripeness. Each terroir type is vinified separately.

In extreme environments, adaptation is key. To compensate the 25% lower oxygen levels at 2,600m altitude, Ao Yun has adapted the winemaking by increasing aeration during maceration, prolonging maceration depending on terroir and vintage, doing malolactic fermentation in new barrel and in oxygen permeable earth Jar and using less Sulphur Dioxide. 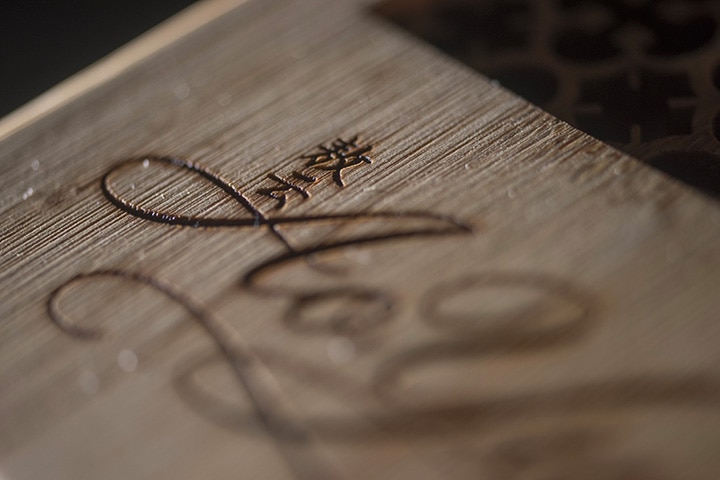 Ao Yun wines express the harmony, elegance and complexity of the terroir's characteristic: concentration with freshness and soft, dense tannins with a long, salty mineral finish. 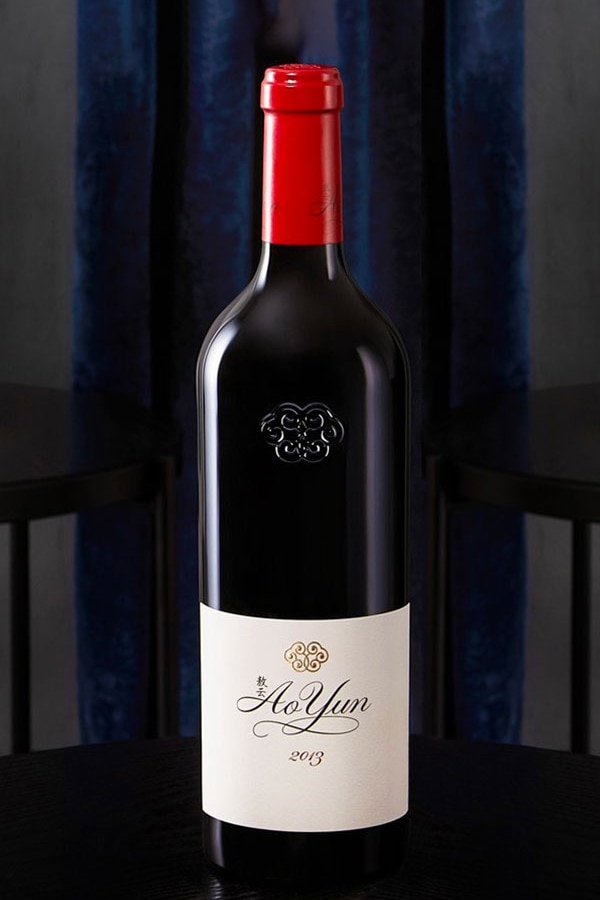 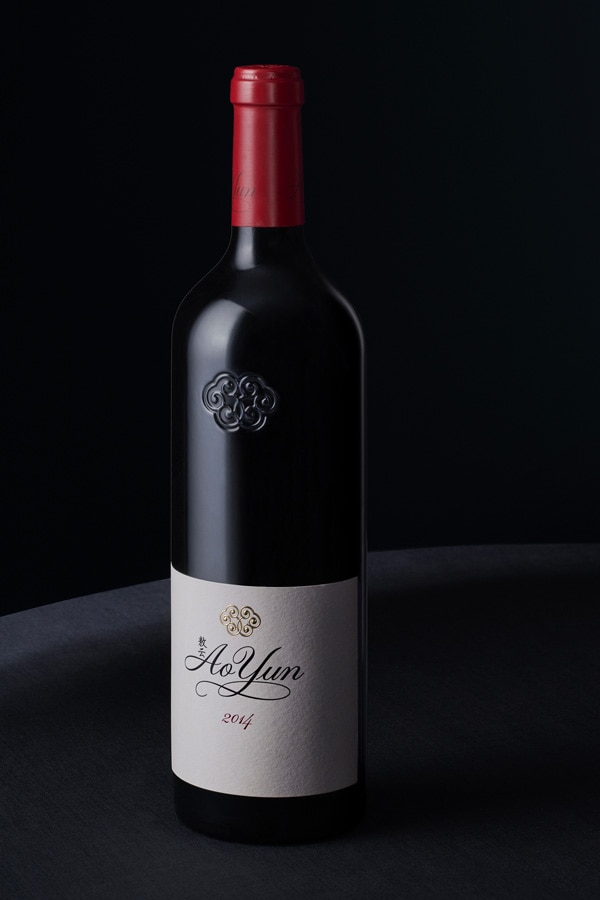 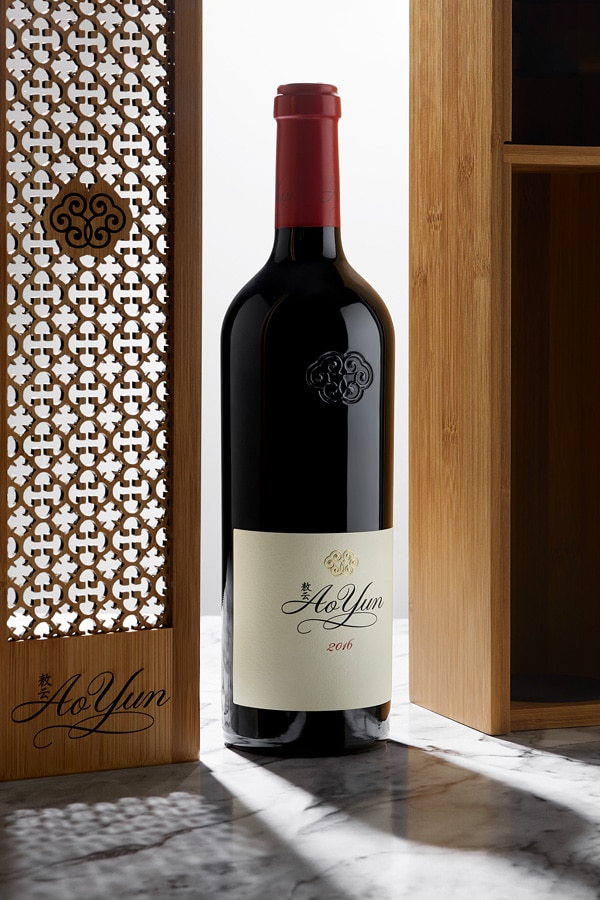 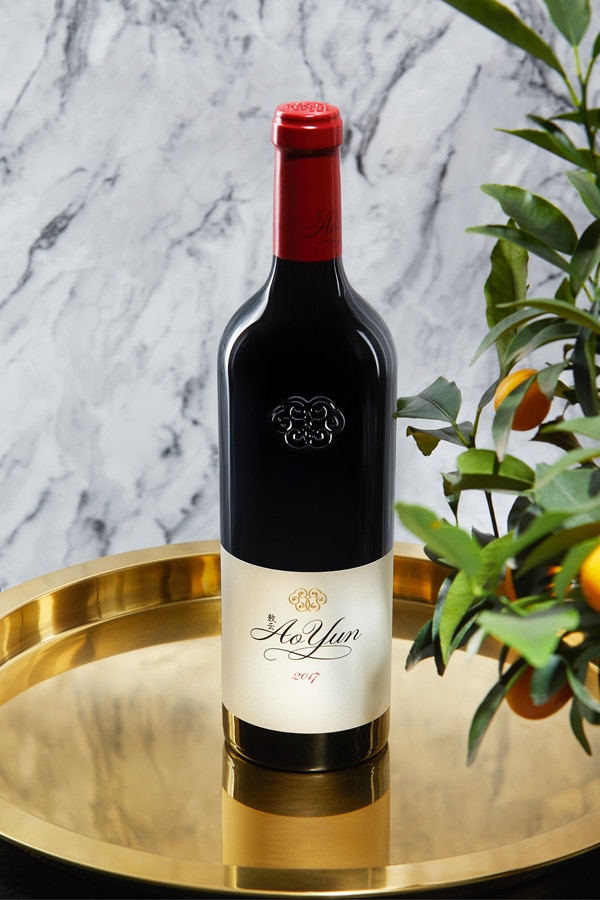 Ao Yun’s first vintage delivers all the finesse, freshness and complexity of this unique Himalayan terroir through its layered aromas and captivating, penetrating flavours.

For this first vintage we had to manage by observation. It required long and meticulous work to start to understand our complex terroir and adapt the handcraft to each soil type and climate.

Ao Yun 2014 is the 2nd vintage of this unique adventure and shows more complexity than 2013 due to better climate conditions during the growing season and vineyard management optimization.

In these conditions all 4 villages performed extremely well to reach our objectives of finesse, freshness and elegance.
We did a soil study with a French terroir expert to identify blocks with similar soil that could be managed similarly and together.

While we are discovering this unique Himalayan terroir every day, we can already say that 2015, in terms of climate, is the greatest vintage since we started to produce wine in this area in 2013.

The year 2015 started warm, with a slightly dry winter, followed by a spring that was warmer and drier than usual, with average temperatures and less rain in the summer. In these conditions, and because Ao Yun looks for elegance, freshness and complexity in its wines, the villages of Adong and Shuori performed exceptionally well.

2016 was marked by an end of season particularly conducive to optimal ripening. The year started with a drier and cooler winter than average, followed by a much rainier and cooler spring until early summer and ended with significantly drier and warmer summer and fall.

In 2016, Ao Yun finetuned its meticulous approach to tasting and blending. After three vintages, the team understood that the altitude of the Adong winery had an impact on taste perception so, in 2016, they decided the exact proportions of each terroir in the final blend through tastings at sea level in Hong Kong for the very first time.

Also, for the first time, 4% of Syrah and 2% of Petit Verdot wine have been added to the blend for complexity and elegance on the palate and nose.

The 2016 vintage is marked by the use of fewer new oak and more 1-year-old barrels, which impart finesse and avoid the overpowering qualities that can arise from too much new oak.

CONCENTRATED BUT FRESH & VELVETY: THE ENHANCEMENT

2017 was marked by the most challenging climate so far in Ao Yun’s journey: A dry and warm winter followed by a cool spring that delayed the growth of the vines. The summer that was cool and too wet. At the beginning of fall, Ao Yun fortunately had a crucial window of 1 month with higher temperatures than average, that helped ripen the grapes.

This season’s climate and the optimized ways of working in the vineyard gave to Ao Yun, a generous harvest with very powerful and beautifully mature grapes.

To reach Ao Yun’s very high-quality standard, the team had to optimize a lot of process and worked very hard and accurately in the vineyard, and in the cellar. Also in 2017, the Ao Yun team had to refine their tannin extraction during the winemaking: during malolactic fermentation and barrel ageing, they increased natural micro-oxygenation to soften their powerful texture.

For the very first time, 2% of Merlot has been added, which brought roundness to the final blend.

Ao Yun harvested all the villages later than subsequent years with lower yields, except for Shuori.

We harvested all the villages much earlier than usually due to the climate conditions but also the lowest yield ever:

We harvested all the villages earlier than usually due to the climate conditions but due to richer yield ever it was not as early harvest as 2014:

The 4 villages were harvested later than average, with very low yields due to green harvesting decisions made to ensure ideal ripeness and concentration. Sinong and Xidang particularly beautifully expressed the elegance, freshness and complexity we look for in Ao Yun.

The 4 villages were harvested later than usual, breaking the record for the latest harvest day for a red wine in the Northern hemisphere, with last grape picked in Adong on 22 November 2017.

The team at Ao Yun understands that the unique climate allows for superb fruit concentration, without tannin oxidation. Consequently, the aromas capture the Himalayan freshness and cellaring potential. 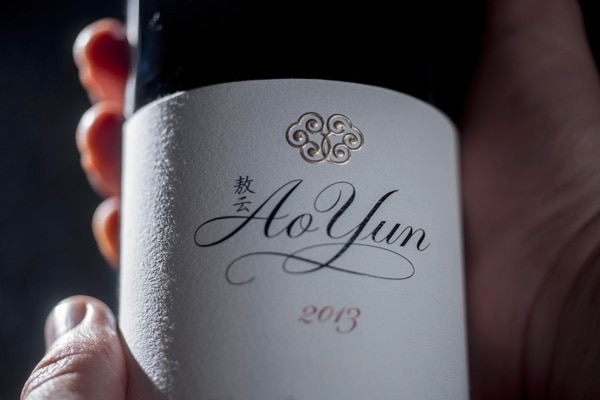 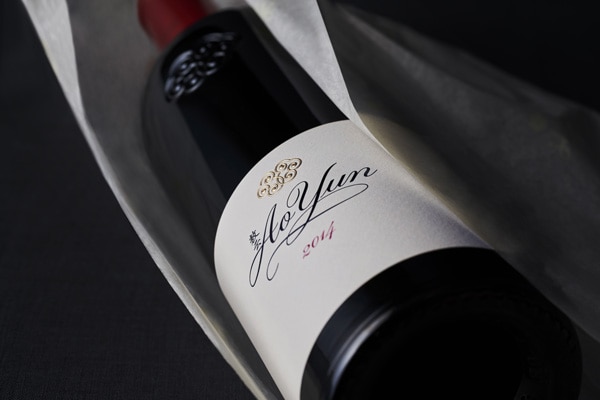 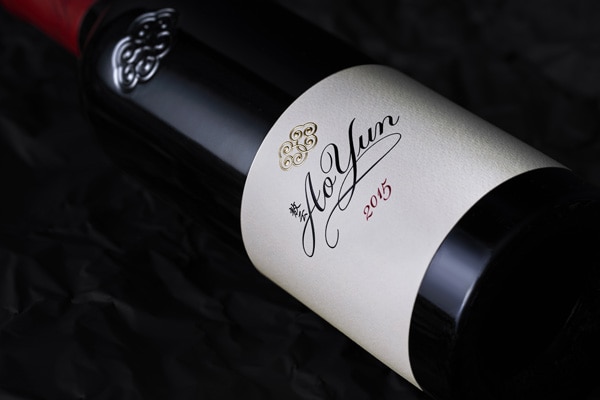 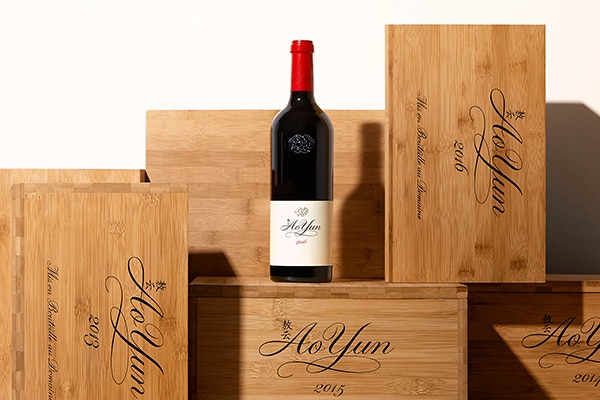 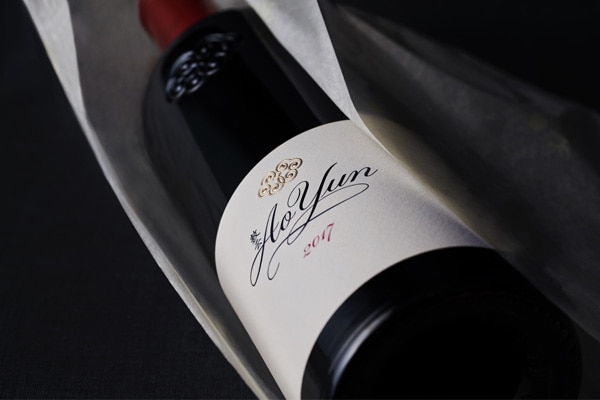 The palate is round and fresh,
juicy and balanced.

Structured and wild,
powerful and tense.

Voluptuous and spicy,
very seductive and round.

Enhance the Ao Yun Tasting Experience with a unique glass

In 2018, Ao Yun and renowned crystal maker Riedel partnered to design a unique glass, created specifically to enhance the tasting experience of the first Grand Cru of the Himalayas.

The Ao Yun stemware delivers the complexity and intensity of the wine's aroma.

The Ao Yun glass highlights the silky, velvety texture of the wine.

The Ao Yun glass creates a balanced interaction between the fruit, minerality and freshness of Ao Yun.